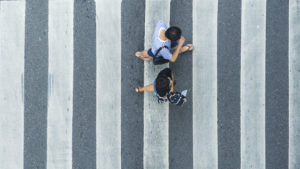 Charlotte, NC – More pedestrians are being killed by automobiles in America than at any time in the past 25 years.

Always be careful crossing the street and be watchful in parking lots.  Just yesterday a North Carolina motorist called Tien Law Firm who had been rammed into in the parking lot, by a driver who pushed the gas mistakenly instead of the brakes, causing approximately $20,000 in vehicle damage.  Accidents such as these demonstrate the importance of pedestrians and bicyclists being alert at all times.

In an effort to reduce the number of pedestrian deaths and bicyclist deaths, North Carolina DOT is launching a “Watch for Me NC” public education campaign focusing on the most commonly ignored laws that contribute to pedestrian and bicyclist crashes and high visibility enforcement at crash hot spots.  The program was pilot tested in four communities in 2012 and grew.  As of 2016, more than 360 targeted safety operations resulted in more than 800 citations, and 33 NC communities participating in 2017.

The campaign has received significant public engagement and media, and was recognized by GHSA with a Peter K O’Rourke Special Achievement Award in 2017.